Women In Arkansas Media Speak Up With #MoreThanABabe 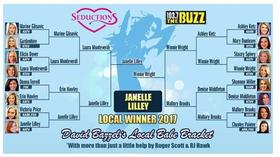 This Thursday women in Arkansas's media world launched the #morethanababe hashtag in response to a local radio show's Babe Bracket that ranks TV journalists based on looks. Governor Asa Hutchinson previously went on program and said "everybody enjoys it” but has since released a statement saying he was not defending the gimmick.

Multiple women in the media have tweeted this morning objecting to KABZ 103.7, The Buzz’s Babe Bracket. A range of journalists and anchors from local television stations THV and KARK, and the Arkansas Democrat-Gazette are participating. Several women in major media markets across the nation have already taken notice of this objectification of women taking place in Arkansas.

THV's Winnie Wright was in last year's bracket. Buzz jocks RJ Hawk, David Bazzel, and Roger Scott put people in the radio gag; contestants do not enter themselves. The Buzz does not list any women on-air hosts in its Monday-Friday 6 a.m.-7 p.m. lineup.

On a daily basis, while I'm working to bring important stories to the people of #Arkansas, I am cat-called, have obscenities yelled at me from cars, have men comment on my appearance in professional setting, and worse.

Arkansas Democrat-Gazette staff were among the more active participants on Twitter.

They're judged on hair, nails, clothing, weight, style and "hotness." They don't clamor for input, and yet they get it anyways.

Once a year, it comes in the form of a "Babe Bracket" put on by @1037TheBuzz.#morethanababe— Emma Pettit (@EmmaJanePettit) February 15, 2018

When I questioned a public official about city business last year they expressed that they wanted me to kill the story and *joked,* “I thought you were my girlfriend.” No matter that I’m married and was 7-months pregnant at the time. #morethanababe https://t.co/yQxU8KLXfl— Chelsea Boozer (@ChelseaBoozer) February 15, 2018

Why do women journalists have to take to Twitter to prove their worth? Because when I told a source yesterday that they were months late on a #FOIA response they asked me if I’d still be their valentine. #morethanababe— Chelsea Boozer (@ChelseaBoozer) February 15, 2018

I’m #morethanababe because I’ve worked tireless hours, missed countless holidays and weekends with friends and family, all to bring the very latest information on stories that matter to YOU!— Isabella Moller (@imollertv) February 15, 2018

I am a working mom of two, a wife, a daughter, an AMS Certified Meteorologist, a math and science nerd, a video game enthusiast :) and SO much more. I choose not to be ranked based solely on my looks because I am #morethanababe.— Natalie Walters (@NatWaltersWX) February 15, 2018

I graduated with distinction and have a BS in atmospheric science. I’m a meteorologist. I’ve worked on research projects for NASA and Duke. I go to schools and teach kids about math, science, and weather. I want to inspire future women in STEM, and that’s why I’m #MoreThanABabe— Kelly Dobeck (@KellyDWeather) February 15, 2018

I started in T.V. in high school. I wrote for a local news show in Fort Smith. I was 16. I remember being so proud. I want that for my girls. I don't want it diminished by a #babebracket. #morethanababe— Amy Hale (@amyisprettycool) February 15, 2018