Weather
Local and Regional Headlines
Here is where you can find news about Jonesboro, Craighead County, and Arkansas at large, as well as news for Missouri and Tennessee.

Residents Prepare for Historic Flooding Disaster, With a Chance of Additional Rain

That's the only way Kary Story, Mayor of Pocahontas, can describe the record flooding coming to his city.  The National Weather Service in Memphis on Tuesday issued a Flash Flood Warning for southeastern Randolph County, and central Lawrence County.

The alert is in response to the Black River at Pocahontas, in which the water overtook the levee causing a failure of the dam.  Governor Asa Hutchinson took a moment from the special legislative session in Little Rock to survey the area.  Hutchinson held a press conference earlier that day with Story and A.J. Gary, the Director of the Arkansas Department of Emergency Management.

Ahead of the flooding, Story issued mandatory evacuations of east Pocahontas.  He said many residents remember the record flooding events in 2008 and 2011, in which the Black River crest around 28ft.  The weather service is expecting the river to reach 31.5 feet by Friday before receding.

Brandon "Bo" Graham, the coordinator for the Randolph County Office of Emergency Management, said he's been working with ADEM for assistance.  Graham said the National Guard has been deployed to the region. "They [ADEM] are helping us with the resources that we need," Graham said.

People from within the community have also been offering assistance to displaced residents.  A shelter was opened at the Old Randolph County Nursing Home.  "We have been in contact with the Red Cross," Graham said, "but we are needing items [such as] linen, pillow cases, towels, washcloths... those types of things."

Another resident providing assistance was Eric Moffett, Pastor of the First Baptist Church of Pocahontas.  "In the last couple of days, we've seen an incredible show of compassionate humanity," Moffett said.  He said many people on the west side of the river have been lending their time and resources to help their neighbors to the east.

Meanwhile, residents in another Mid-South community were recently devastated by flooding caused by the weekend storms.  Doniphan, Mo. sits near the Current River.  Over the weekend, rising waters from the river flooded many businesses, seeped into their City Hall, and caused a bridge which crosses the river to close.  The water was so high, that it covered the bridge.

Teresa Lee lives in Doniphan.  She is also one of the former owner-operators of "K. C.'s On the Current," which is a company that offers kayaking and canoe tours on the Current River.  The flooding impacted K. C.'s this time just as it did back in 2008.

Since this weekend, the waters have receded and local officials have opened the bridge back up.  However, more rain is expected to enter the Mid-South as early as Wednesday.  Lee said city officials were still evaluating the safety of the bridge.  She said the additional weather has put the entire community "on edge."

As for Pocahontas, Story said something needs to be done to look at the current levee system to prevent this kind of disaster from happening again.

"I think we need to have [the U. S. Army Corps. of] engineers to do some studies," Story said.  "I'd like to see an impact study done to see what we can do to relieve Pocahontas."

Being a family man himself, Mayor Story said how the flooding of his city will impact families is something that will stay with him.  "My heart goes out to those children and families," Story said, "but I am proud that we live in a community that's come together and is trying to help each other, and will help each other, through this."

Brandon Tabor
A Northeast Arkansas native from Wynne, I’ve been involved with radio for about 15 years. I got my Bachelor of Arts degree from Henderson State University in Arkadelphia, where I also served as an award-winning News Director for 2 years at KSWH-LP.
See stories by Brandon Tabor 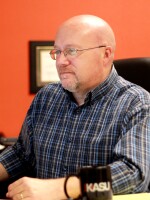 Mark Smith
A graduate of the radio-television program at A-State, Mark Smith earned his degree in broadcasting in 1986 and received a Master of Public Administration in 2015. He actually started in radio in 1982, just out of high school, with a part-time summer job at KBXM, a small AM station in Kennett, Mo. After his freshman year at Arkansas State, he landed another summer job at KBOA/KTMO in Kennett and continued to work weekends there while attending college.
See stories by Mark Smith
Related Content