The anniversary of the desegregation of Central High School in Little Rock has brought national attention to Little Rock and renewed interest in the nine students who made history this month 60 years ago, even as a number of Little Rock residents talk of re-segregation of the school district and the ongoing state control of the city's public schools.

At a symposium on Saturday, the Little Rock Nine and their families told stories about segregation. Ernest Green’s sister Judy said their parents inspired them to stand up.

“Pfeifer department store at Sixth and Main had two water fountains in the basement. One was marked 'Colored,' the other marked ‘White,’ and I was learning to read, and I asked my mother which one I should drink from, and she said, 'Whichever one you wish.'”

The Hon. Wiley Branton Jr. remembered his father’s work as an attorney for the students. He choked up reading part of the 1954 Brown v. Board ruling, which he said still resonates in the country today. 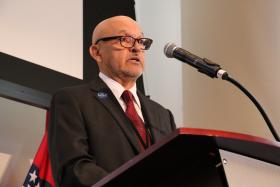 "To separate them from others of similar age and qualifications solely because of their race generates a feeling of inferiority as to their status in the community that may affect their hearts and minds in a way…,” he said, trailing off.

The panel covered the history of civil rights in Arkansas prior to the desegregation crisis, 1957 and what’s called the “lost year” when city schools were closed in 1958 and 1959 to prevent integration.

Phyllis Brown, younger sister of Minnijean Brown-Trickey, says she sees the closing of schools today and the growth of charter schools to be a continuation of the “lost year” efforts to shutter the district.

She said celebrating integration is like “alchemizing our sins into virtues.”

“Yes. Here we are. Celebrating, ‘Go Central! Go tigers!’ Remember that those same mechanisms are still working that still deprive these children. Well they even deprived me, and that was 60 years ago!”

Emotions and sentiments spanned broadly over the four-hour discussion.

She said Becky was willing to be her friend, but in secret, because she feared what the other white students would do. 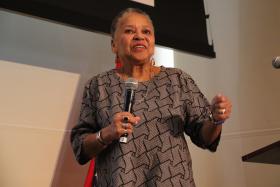 “There were a lot of people in that school that felt exactly the way she did. They were willing to be my friend and make a difference for the moment they were there with me, but they didn’t feel up to facing all the consequences to their personal lives and their families when they were away. I say, I appreciated Becky. I looked forward to when I got to her classroom.”

Monday morning a ceremony commemorating the 60th anniversary of the desegregation of Central will take place in the school's auditorium with keynote speaker President Bill Clinton.

This is the 6:04 KASU newscast for Monday, September 25th.

Here are the stories reported this morning:

Elizabeth Eckford only had one concern before her first day of school. She wanted to make sure her white dress was finished so she could wear it. The next morning she was wearing the dress as her father paced back and forth in the hallway. She took a city bus to Little Rock Central High School. It was Sept. 4, 1957.